OXFORD, Miss. – Every leap year since 2008, a University of Mississippi student has been surprised with a Morris K. Udall Scholarship. This year is no exception, as Grace Sullivan became the university’s third recipient of the prestigious academic award. 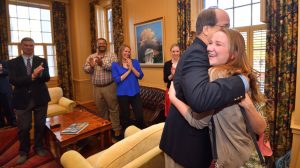 The junior social work major from Madison got the news recently when she was summoned to Chancellor Jeffery Vitter’s office in the Lyceum. Led to believe that the chancellor was meeting with all institutional nominees for national fellowships, Sullivan had no idea she had actually won the Udall.

“I was just overwhelmed by the support that I have been given in my years at Ole Miss,” she said. “So many people have come alongside me and provided me with opportunities to serve and develop my ambitions in sustainability. I know that I would not be a Udall Scholar without the support of all of them.”

As the chancellor announced the good news, he extended thanks to her professors, staff members who have assisted her and family supporters.

“I love to see effective passion, and Grace has taken a lot of good advice and channeled it in healthy and constructive ways,” Vitter said. “Part of what education is about is helping people find what they love and then use it to make the world a better place. Our students are making a difference, and we are pleased when their efforts are recognized on a national scale. We look forward to following Grace’s career and seeing what she will accomplish.”

Sullivan is among 60 national winners of the scholarships, given annually to college sophomores and juniors who are committed to careers related to the environment, tribal public policy or Native American health care.

“I will be putting the monetary scholarship from the Udall toward my graduate studies,” Sullivan said. “I plan to attain a master’s in social work and a law degree, so I am thankful to have this assistance as it seems I have a lot of education left to go. More importantly, I think that the Udall will help me in my further studies by providing a network of support through the other scholars.”

She is also a member of the Ole Miss Cycling Club and UM Garden Club.

As a sophomore, she led her sorority’s team in the Green Cup competition, an annual event among Greek houses to be named the most sustainable, culminating in Green Week. Intent on being interactive with members and on encouraging involvement, the team developed a project to reduce transportation waste.

“I had everyone sign a pledge to carpool, take a bus or ride a bike to campus at least once a week,” she said. “When I gave a presentation about easy sustainable choices on campus, I asked to see the hands of those who had used our recycling receptacles or who had noticed them and chosen the nearby trashcans instead.”

As a second project, Sullivan took groups to local recreation trails to pick up litter.

“After that year, I think that a significant difference will be made,” Sullivan said. “I see this experience as a microcosm for culture around sustainability in Mississippi and the potential for progress. For anything to change, individuals have to be engaged and understand their impact.”

“I have known Grace Sullivan since her freshman year, and I have worked with her extensively both formally through internships and informally through collaborative partnerships and committee service, which speaks to the kind of dedication and commitment she has,” said Anne McCauley, assistant director of the Office of Sustainability. “She is passionate, driven, smart and yet humble. I am thrilled to see her being recognized and know that she certainly deserves this honor.”

Honors College Dean Douglass Sullivan-González said he was pleased, but not really surprised.

“Grace Sullivan leads by example,” Sullivan-González said. “She makes her academic pilgrimage come alive with her commitment to our university community as both citizen and scholar, and Udall distinguished that record with this extraordinary award.”

Sullivan credits the university with developing her leadership skills.

“Social work and law are not the typical avenues through which people expect environmental activism to grow, but I think that the Udall Foundation appreciates that change has to come from every direction,” she said. “Getting to know the diverse group of students that will become the generation that fights with me will likely help direct and support me in my future studies even more than funds can.”

Besides her work in the world of environmentalism, Sullivan fosters education and activism for local birds, volunteers at an Oxford nursing home and is a member of the Student Gardening Club, all while maintaining a 3.76 GPA.

In her Udall application, she wrote that she hoped “to go into public service in Mississippi, eventually transitioning into a community planning position in which I will encourage sustainable practices as a way to combat social ills.” This scholarship is a sign of Sullivan’s dedication and potential, and will offer unique opportunities as well.

One of Sullivan’s mentors is Tess Lefmann, assistant professor of social work.

“Grace is a wonderful student whose passion for sustainability is evident in her work and presence in the classroom,” Lefmann said. “Her united interest in social welfare and the environment has sparked new dialogue among social work students, which has been a joy to witness.”

Lefmann said she has no doubt that Sullivan will continue to make valuable contributions to the country’s policies on energy use and environmental sustainability.

Sullivan’s parents are Dr. David and Claire Sullivan of Madison, both UM alumni.

Congress established the Udall Foundation as an independent executive branch agency in 1992 to honor Morris K. Udall’s 30 years of service in the U.S. House of Representatives. Students interested in pursuing a Udall Scholarship can contact Tim Dolan, the university’s Udall representative, at onsa@olemiss.edu.

The Office of National Scholarship Advisement conducts workshops each semester to introduce students to major national scholarships. Go to https://www.honors.olemiss.edu/national-scholarship/ for more information.